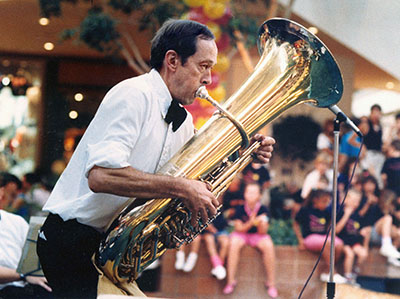 Over 50 years with the Tuba and Trombone

Everett Gilmore was born in Wheeling, West Virginia on December 13, 1935 and died on April 14, 2005 of cancer. The son of Everett M. Gilmore, Sr. and Elizabeth Rogers Gilmore. Everett is survived by his wife Mary, daughter Nikki Mundt, two brothers Larry and Richard and two grandchildren.

Everett's musical studies began in grade school with two years of piano lessons. That led, in seventh grade, to his playing the trombone which he kept up through his college years and even after his retirement from the Dallas Symphony Orchestra. Everett's early interest in music came from his mother, who was a school teacher and classically trained pianist.

In 1953, Everett enrolled at George Williams College in Chicago majoring in Social Work, however; there was no music program or band with which he could perform. After a couple of years Everett took a leave from school and pursued several different jobs to earn a living. After some serious soul searching he decided to return to college but this time made sure that the school he attended offered music in the curriculum. This led Everett to enroll at Lebanon Valley College in Annville, Pennsylvania, where he earned a Bachelor of Arts degree with a major in psychology and a minor in music. Upon arrival at Lebanon Valley College Everett was informed that they did not really need another trombonist in the band but were in dire need of a tuba player, so he volunteered to switch. At Lebanon Valley College, Everett studied both tuba and trombone with Dr. James Thurmond, who was also the band director.

Following his graduation from Lebanon Valley College in 1958, he was appointed to a position with the US Army Field Band in Washington, DC. Initially Everett was inclined to audition for the band on trombone but his friend Ted Bloomenthal urged him to take along his tuba, so he did. While in basic training the Commanding Officer called Everett in and informed him that they wanted to start a fife and drum corps. The CO asked, "Gilmore, your file says you're a musician. Can you play the fife?" Everett stood at attention and replied immediately, "Yes, sir! What's a fife?" He was put in charge of organizing the new group and never pulled KP duty again. While in the Army, Everett performed in a section that included Dick Sullivan, Richard Pittman and Ron Bishop. Not long after arriving Everett heard news of a new band being formed and volunteered to transfer to the NORAD Command Band located in Colorado Springs, Colorado.

During and after his service band career, Everett was a student of Charles Gusikoff of the Philadelphia Orchestra. In 1962 Everett began a Master of Arts degree in Library Science from the University of Denver, Colorado. One year later in 1963 he assumed the position of principal tuba with the Wichita Symphony Orchestra of Wichita, Kansas, and was compensated with an annual salary of $500! He was concurrently a full-time librarian for the City Library of Wichita. It was during his time in Wichita that Everett traveled to Chicago for independent tuba studies with Arnold Jacobs of the Chicago Symphony Orchestra.

With only a six-day notice, Everett Gilmore traveled from his home in Denver, Colorado, to Dallas in order to audition for the principal tuba position with the Dallas Symphony Orchestra. On May 31, 1965, Everett won the audition after competing with twelve other tubists. Subsequently, he held the principal tuba position with the Dallas Symphony Orchestra for thirty seasons through 1995. During his first season the DSO trombone section consisted of principal trombone Gordon Sweeney, second trombone Chuck Mandernach, and bass trombone Morris Repass, who was replaced one season later by Daral Rauscher. Everett and Daral sat next to each other and were "good partners" (in Ev's words) for 29 seasons until they retired together at the end of the 1994-95 season. Everett played more than 50 recordings during his DSO tenure, notably conducted by former music director Eduardo Mata. Everett also studied tuba with William Bell in the summer of 1969 at Aspen, Colorado.

Once while being interviewed for an article about his career Everett was asked about his strong love for playing the tuba, his response was "You know, after being in the orchestra about five years, I was getting bored. I had already played most of the music I was going to ever play. I spent the summer of 1972 in a school of yoga and I learned to relax a lot more. When I came back, I was able to get some pleasure out of playing a whole note that I had not had before. I was able to enjoy sitting still; I learned something about how to sit still and be connected rather than being agitated and bored. I learned to listen and enjoy hearing the orchestra play. You have a lot of rests as a tuba player, I learned to enjoy sitting there and waiting my turn In the New World Symphony. I even learned how I could stand in the supermarket line for twenty minutes and enjoy that!"

Everett Gilmore had many other musical activities during his DSO tenure including the founding of several ensembles including the Texas Tuba Quartet, Dallas Tuba Quartet and Dallas Brass Quintet that recorded with Crystal Records (DBQ-S203). He is a co-founder of both the annual Dallas and Fort Worth TUBACHRISTMAS concerts. He served as Adjunct Tuba Professor at Southern Methodist University during his tenure with the DSO, and continued to serve as Adjunct Tuba Professor at the University of North Texas until his illness earlier this year. Enjoying many years as a free-lance low brass player in the local recording industry, Everett was also an expert music copyist and arranger. He produced music manuscripts by hand for many famous composers and arrangers such as Alberto Ginastera, Phil Kelly, Tom Merriman and Robert Xavier Rodriguez.

In addition to his private and university teaching experience following his DSO retirement, Mr. Gilmore was an active member of the Texas Wind Symphony, Symphonic Brass Quintet, Jodie Mikula Orchestra, Lewisville Lake Symphony and the Swing Time Rehearsal Band (on fourth trombone). He also performed with the Dallas Wind Symphony, Dallas Opera Orchestra, Fort Worth Symphony Orchestra as well as assorted chamber and orchestral ensembles in various churches and religious establishments throughout the Dallas-Fort Worth metroplex.

Besides his distinguished career in music, Everett Gilmore participated frequently in local and state political issues and dialogue. He was concerned about progressive ideals such as the civil liberties as outlined in the Bill of Rights. One such cause resulted in the 1968 United States Supreme Court decision declaring loyalty oaths unconstitutional in James vs. Gilmore. He contributed his time, ideas and interests to progressive causes throughout his life. He and his wife Mary are members of the Unitarian Church of Dallas.

Everett Gilmore was a Miraphone tuba artist throughout his career. He began with the acquisition of a 186BBb Miraphone tuba that he chose from a batch of new BBb and CC tubas in Hollywood, California, during his service band tenure in 1960. He chose a 186BBb model because it had the best tone and intonation of those available at that time. Also, Mr. Gilmore performed frequently on his 185BBb and 181F Miraphone tubas.

The University of North Texas College of Music has established the Everett M. Gilmore Orchestra Tuba Scholarship in honor of Everett Gilmore who played principal tuba with the Dallas Symphony Orchestra for 30 years and served as an adjunct professor in the College of Music. Mr. Gilmore's devotion to fine musical performance and to the teaching of young musicians made a significant impact on many lives throughout the university and beyond. For further information about the scholarship contact: 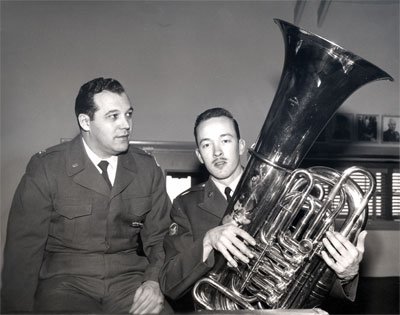 The University of North Texas has established the Everett Gilmore Miraphone Tuba Scholarship, a $1000 per year award in memory of Everett Gilmore (1935-2005) that will provide scholarships for tuba students in the College of Music. Mr. Gilmore was the principal tuba of the Dallas Symphony for 30 years through 1995 and adjunct professor of tuba at the UNT College of Music for many years through early 2005.

This scholarship award was made possible through the generosity of Miraphone Instruments of Germany in honor of Mr. Gilmore who was a Miraphone tuba artist throughout his career. Founded in 1946, Miraphone Instruments (www.miraphone.de) is located in Waldkraiburg, Germany, east of Munich. Over the last 50 years, Miraphone has developed a reputation for producing elegantly handcrafted trumpets, fluegel horns, tenor horns, baritones, trombones, and tubas. Professional musicians, hobby players, and amateurs throughout the world perform on Miraphone brass instruments.

Miraphone Instruments released the following statement about Mr. Gilmore to the first recipient of this scholarship award, tubist Sarah Ruddy:

"We at Miraphone Instruments are sure that Mr. Everett Gilmore would echo the thoughts of the philosopher Galileo in saying, "I never met a man so ignorant that I couldn't learn something from him." Throughout his life, Mr. Gilmore never ceased to study and be active. There was always something to learn, and someone to learn it from. As you begin your studies, we would encourage you to forge ahead embracing with an open mind the musical experiences that are presented to you, and to make your own way looking always for something new to learn and an unexpected someone from whom to learn it. Mr. Gilmore was a Miraphone advocate throughout his career, and it is our hope that this scholarship in his memory will help also to achieve your dreams and goals in life's journey."

Sarah Ruddy graduated in 2005 from Oak Ridge High School of Conroe, Texas and was a student of William Rose, the esteemed former principal tuba of the Houston Symphony. Sarah will graduate from the UNT College of Music in 2010 with both Bachelor of Music Education and Bachelor of Music in Tuba Performance degrees.

The photo of Mr. Gilmore was taken circa 1960 when he was serving the US Army as a member of the NORAD Command Band, Colorado Springs, Colorado. This was his first Miraphone tuba that he played throughout his entire career.